Beavis and Butt-Head
Register
Don't have an account?
Sign In
Advertisement
in: Article stubs, Characters, Villains,
and 2 more

Edit
watch 01:36
We're Getting Mutants in the MCU - The Loop
Do you like this video?
Play Sound

Beavis and Butt-Head Do the Universe
Todd is a violent hoodlum whom Beavis and Butt-head idolize. In "Steamroller," he is said to have dropped-out of Highland High School two years before (though he makes a brief appearance in Coach Buzzcut's class in "Young, Gifted, & Crude," "They're Coming to Take Me Away, Huh Huh," and "Let's Clean it Up").

Beavis and Butt-head look up to Todd and aspire to become part of his gang which consists of himself, his friend Slade, and his apparently part-time fair-weather trashy girlfriend, Gina, who attends Highland High with the duo. Todd, however, expresses only contempt for the two, assaulting them with little or no provocation and referring to them as "girls." A running joke is whenever Beavis and Butt-Head are interested in a woman, she runs off with him—even sometimes having immediate sex with him. Todd is not above taking advantage of Beavis and Butt-head when he needs money or a place to hide from the cops.

Todd drives a rather battered and well-worn primer-patched green Plymouth Duster recklessly, often onto lawns, through garbage cans, and usually over Beavis and Butt-head's bikes.

In the Super Nintendo game, Beavis and Butt-head win a game of chicken against Todd and Earl and manage to have sent him to the hospital, while in Virtual Stupidity, he is smacked around and then crushed by a cow carcass during Butt-head's attempt to "save him" via a slaughterhouse processing machine. In the end, the duo even got him arrested after his enemy's body is discovered in the slaughterhouse.

Even though Todd's last name was never mentioned in the series, it was revealed to be Ianuzzi in "This Book Sucks."

He was created after series writers Sam Johnson and Chris Marcil suggested the idea of a character that Beavis and Butt-head idolize, even though he beats them up and always rips them off in one way or another. Mike Judge revaled that he based Todd on a teenage bully that lived near him, who's family was somewhat troubled as well. The bully would ride his motorcycle on Judge's family's front lawn and do burnouts, which terrified him as a kid.

Todd made his official return to the series in "Snitchers", where he was voiced by Toby Huss.

Todd wears a light blue mechanic's shirt with a name patch and the sleeves torn off, jeans and black boots. He has long blond hair and wears mirrored sunglasses; he has a tattoo on his left (sometimes right) bicep of a flaming skull wearing an eye-patch clutching a knife between its teeth with the script "Life Sucks."

Todd in The Crush. 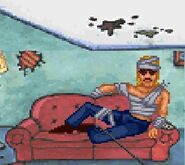 Todd in Beavis and Butt-Head's House in Virtual Stupidity.