Beavis and Butt-Head
Register
Don't have an account?
Sign In
Advertisement
in: Article stubs, Characters, Stevenson Family,
and 3 more

Dumb Design
Stewart Stevenson is a nerdy, wimpy and obese upper middle class teen (in the episode Kidnapped when asked how much money his parents have, he says "Oh, I'd say more than average") who lives nearby the boys. He often tries to make friends with them, but they always wind up leaving him when he sits down to talk ("Killing Time") or brutally taking advantage of him. He is significantly shorter than the two, with shoulder length blond hair, and often wears a black "Winger" T-shirt. In Crisis Line, Stewart reveals that he sometimes wets his bed. He is also associated with a conservative Christian Youth Group called Positive Acting Teens (PATs).

He was originally voiced by Adam Welsh. However, Thomas Middleditch voiced him for the show's revival.

Relationship with Beavis and Butt-head[]

Stewart greatly admires Beavis and Butt-head and believes they are his best friends, although it's Butt-Head that enjoys taking advantage of the "relationship", relating to him mostly in the same way that Todd relates to them. They bully Stewart and regularly take advantage of his attempts to befriend them, usually resulting in Stewart getting in trouble with his parents for something actually done by Beavis and Butt-head. Examples of the boys taking advantage of him include densely destroying his house and parent's belongings in the pursuit of something to do when they come over, and using his computer experience to look at porn on the school's computers. They have also caused his family distress at times too, like when they were responsible for an angry man's physical abuse of Stewart's father, and when they let robbers posing as moving men take many of the family's possessions and wreck their house. In Stewart Is Missing, they forgot that they locked Stewart in their own closet, causing his parents to worry sick about him. Beavis, when not around Butt-head, is more friendly towards him. In one instance, Beavis allows Stewart to have the majority of his nachos for a dollar (Choke). In the Christmas special episode It's A Miserable Life, we see if Butt-Head had never been born, Beavis and Stewart would be best friends. Just as Beavis sort of follows Butt-Head, Beavis would be Stewart's lackey and do the same goodwill charity Stewart does. Stewart would actually be assertive and not such a pushover.

Stewart with Beavis and Butt-head. 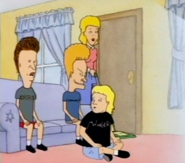