Beavis and Butt-Head
Register
Don't have an account?
Sign In
Advertisement
in: Article stubs, Characters, Highland High School,
and 3 more

Little is known about Principal McVicker, and his legacy, within Highland High. All we know is that he is old, was born sometime in the 20th century, takes medication due to his shakes and seizures, and constantly talks like he's about to have an heart attack (which is ironic, since it actually happened in the series once).

His appearance consists of his body being chonky and his head being thinning in the hairs due to old age. His outfit consists of a dark grey uniform with a white shirt and dark green neck tie underneath the coat, and a pair of black/brown shoes.

Principal McVicker has an unstable and troubled personality. He tends to have minor seizures during school hours from time to time and gets angry from whatever goes wrong with people like Beavis and Butt-head and even peace-loving teacher David Van Driessen. His beliefs towards Beavis and Butt-head consist of his thought of how they are complete idiots and do not even belong in the 9th grade. He doesn't support people like Beavis and Butt-head and it seems that he doesn't support any of his students within Highland High. As a shaky person, he is seen to be taking the medication in the show to calm his nerves, but for the most part, he is angry just about every day depending on what is going on at the school. His age as seen seems to be somewhere between 50 and 70 years old, but there is no clear cut as to what it exactly is. During the Scared Straight Program, instead of looking at records of the students, he looks at pictures at students that he believes are criminals.

However, he still has a small modicum of hope left for the duo, or at least Beavis. In the episode The Great Cornholio when Beavis mumbles an apology McVicker was so pleasantly surprised that he let Beavis go, without any punishment. This likely went away after Beavis reverted to his Cornholio persona at the end of the episode. 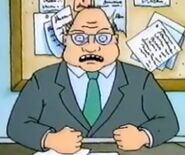 McVicker screaming at Beavis and Butt-head