Beavis and Butt-head receive a new phone book and immediately decide to call someone. After rejecting several prospects, they finally settle on a biker named Harry Sachz (pronounced "Hairy Sack"), whose name the duo find amusing. Over the next six weeks, they proceed to drive him into a near-homicidal rage through repeated prank calls, involving the flushing of a toilet and other scatological noises.

Fed up with the constant harassment, Sachz eventually purchases a caller ID and uses it to trace their phone number. He then calls Beavis and Butt-head back and tells them they've won a free pizza as a ruse to find out where they live, but incredibly they are unable to remember their own address to tell him where to deliver it. When Sachz asks them to read the address off their mail, Butt-head reads Stewart's name and address off some mail he and Beavis stole from the Stevensons' mailbox.

Thinking his ruse has succeeded, Sachz then goes to Stewart's house and kicks the front door in. Seizing Stewart and lifting him up by the arm, he calls him a "little worm" and demands to know if it was him. Stewart, of course, is unaware what he is talking about and for a second it looks as if Sachz is going to punch him until Stewart's father walks in yelling about the noise. Seeing a cordless phone in Mr. Stevenson's hand, Sachz screams, "IT WAS YOU, WASN'T IT?! I'll KILL YOU!!!" and tackles him. He then drags him into the bathroom and gives him a swirly, telling him that if he ever calls him again, he will find him, wherever he is, and gut him. To which he adds, "But just to make sure you don't call me, I'm gonna stick this phone, where you'll have an awful hard time dialin' it!" Against his pleas for mercy, Sachz then painfully shoves the phone up Mr. Stevenson's rectum as he screams in agony.

Later that night, Beavis and Butt-head are on their front lawn, the latter complaining that he's hungry and wondering where the pizza is. Seeing an ambulance and several police cars down the road at Stewart's house, they try to call him and find out what's going on. As a result, just as Mr. Stevenson is loaded into the ambulance, the phone starts to ring painfully inside his anus.

When nobody answers their call, Beavis and Butt-head conclude that the Stevensons might not be home and Beavis suggests that they call Harry Sachz again. Butt-head agrees and the episode ends with the two of them going into the bathroom and the sound of the phone being dialed. Sachz is heard answering the call, followed by the sound of the toilet flushing and the duo laughing. 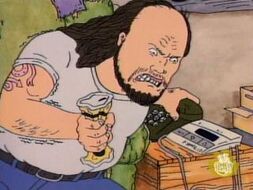 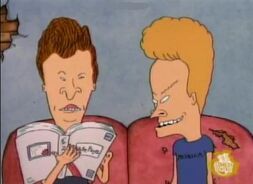 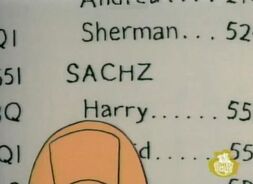 Add a photo to this gallery

Retrieved from "https://beavisandbutthead.fandom.com/wiki/Prank_Call?oldid=16010"
Community content is available under CC-BY-SA unless otherwise noted.