Peace, Love & Understanding is the 2nd Pilot of Beavis and Butt-head, after Frog Baseball. This episode was funded by Spike and Mike and was shown on MTV's Liquid Television in 1992. Creator, Mike Judge stated in an interview that he hated this particular episode, along with Give Blood, which were both conceived on the same day.

After sniffing modeling glue, Beavis and Butt-head see a TV ad for a monster-truck show. When they attend, they witness Van Driessen being splattered all over the stadium, a collision with the port-a-potties, and Sterculius, the Roman God of Feces.

The Duo Rocking Out 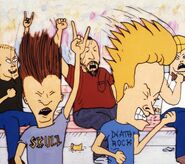 Poster For The Episode
Add a photo to this gallery

Retrieved from "https://beavisandbutthead.fandom.com/wiki/Peace,_Love_and_Understanding?oldid=14823"
Community content is available under CC-BY-SA unless otherwise noted.