Beavis and Butt-Head
Register
Don't have an account?
Sign In
Advertisement
in: Characters, Highland High School, Stevenson Family,
and 2 more

Edit
watch 01:36
We're Getting Mutants in the MCU - The Loop
Do you like this video?
Play Sound

Doomsday
Mr. Stevenson Is Stewart's father and is a middle-aged man who is quick to anger. In early episodes, he is a teacher at Highland High (No Laughing , Citizen Butt-Head ). It's possible that Stevenson had quit his job at Highland High after having enough of Beavis and Butthead's shenanigans.

Later, Stevenson is a businessman, judging from his cell phone and references to "the office" (Prank Call). He is a regular victim of Beavis and Butt-head's destructive shenanigans, such as having his house blown up (Stewart's House) or vandalized (Stewart Moves Away & Doomsday), being involved in a car accident by following wrong traffic directions (Blackout!), or having his own phone forcefully inserted into his rectum (Prank Call) when Beavis and Butt-head accidentally lead prank-call victim Harry Sachz to his house. He tries to come off as a caring and responsible family man, but he reveals his cowardly nature in times of distress, invariably trying to shift blame to Stewart. He has a large collection of pornographic magazines, which Beavis and Butt-head know the exact location of; along with this and the implication that he is impotent in Sperm Bank when he visits a sperm bank with his wife, he is either or not sexually attracted to his wife.

He is voiced by Mike Judge. 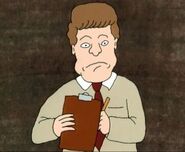 Mr. Stevenson as a teacher in "No Laughing".

What's so funny you little twerps, I'll spank your monkeys! 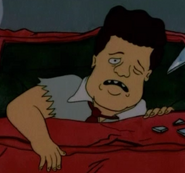