Highland is the series' main setting. 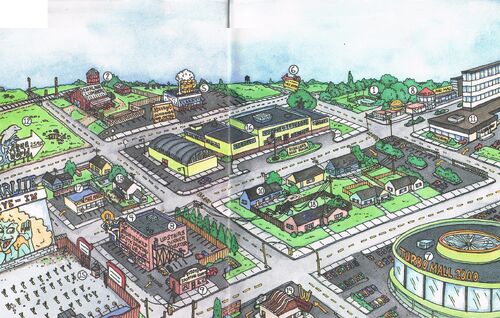 Highland is a fictional town in the USA, possibly near the border of Texas and eastern New Mexico. It is also Beavis and Butt-head's hometown and most of the series takes place in this town. To some fans, it's likely the town is located in the city of Albuquerque, New Mexico.

It is more likely to be in the state of Texas however. In the Beavis and Butt-head Do America movie, Highland is only 40-80 miles North-Northeast near the desert sites of where Beavis went on his peyote trip in the middle of the movie. It makes perfect sense since Muddy is nearby and he can't live that far from where they were found in the desert since they started from Highland in the first place. Beavis and Butt-head's home was not too far away at all when they were in the desert and it can even be proven when watching episodes involving them being in the desert as well as the mountains which aren't far from Highland. They basically drove right near their own house in the middle of the movie within Texas as it's shown on the map after Muddy picks them up when he changes his mind about killing them in the desert after finding them. Notice that Beavis and Butt-head are in a different spot in the desert where a road is nearby to the left of the screen. There was no road in that spot when we first see them freaking out in the desert, so this must mean that Muddy picked them up to take them to another spot which is much close to Highland in the state of Texas. The spot they were originally in had to be in New Mexico since that scene took place before they were even in Texas after Muddy picked them up following being questioned by ATF officials.

It's most likely in a dry, warm clime, though as most episodes feature a blazing yellow sun high in the sky. Much of the surrounding ecology is badland, plains, and flat desert, with few patches of forest and mountains. Although mentioned in Daria, the town is also said to have uranium in the drinking water.

Considering the series' view in a rather cynical, sarcastic, and humorous light, as far as the town goes, Highland appears to not have aged well; despite all attempts to be a model all American town to live the American Dream in, much of the town shows years of wear and tear over the economy's directions and society's changes over time. Many of the streets that Beavis and Butthead walk down on are usually shown as rundown and gritty, with many businesses locally owned but appearing to struggle, with a Turbo Mall 2000 appearing to have taken plenty of business away.

The people of Highland, though possibly well behaved, are often seen to be myopic and prudish, opportunistic and materialistic, inane, shortsighted, dimwitted, kitsch and affluently decadent, to slobbish, shabby, burnt out, and even outright criminally delinquent and violent. Teenagers are nonetheless eager to get out of Highland or are apathetic and aimless.

Likewise with Texas, it's located in the Bible Belt. There appears to be a large network of Prosperity Gospel and televangelist Christian business owners who run the upper scale businesses in Highland. Conservative Fundamentalist talk show host Gus Baker is shown to have his headquarters set up in Highland, before his fall from fame.

There also appears to be a largely ignored seedy underbelly and impoverished lower class ghettos; the fact that Todd and his gang terrorize the town, and to even the fact that Highland's more overlooked aspects gave birth to Beavis and Butthead, is testament to this fact. Businesses in Highland, notably in the heart of the town, are shown to have barred windows and doors. Blackouts usually showcase a lot of explosive social tension, crime and theft in Highland. Considering its location, it also appears that it's a hot spot for drug runners who cross the border.

Retrieved from "https://beavisandbutthead.fandom.com/wiki/Highland?oldid=13686"
Community content is available under CC-BY-SA unless otherwise noted.