Frog Baseball was one of two pilot episodes of Beavis and Butt-head (the other being Peace, Love and Understanding) which aired as segments on MTV's Liquid Television program.

We get our first glimpse of our friends Beavis (Mike Judge) and Butt-head (also voiced by Judge) watching television. While flipping through channels, first what appears to be an attorney ad, then an ad for a show called "Cop Rock", which airs at 9:00 pm, they start giggling at the "Thigh-Master" promo. After the titles, we find the duo's favorite activity; blowing up locusts with a zippo and a firecracker. After doing some air-guitar, Beavis spots a frog. What happens next is unlucky indeed for said frog, since the two boys decide to play a rather twisted version of America's favorite pastime of "frog baseball." After many misses, and clubbing Beavis in the head, Butt-head demolishes the creature with the bat. But, after more air-guitar, Beavis spots Mrs. Higgins' poodle... 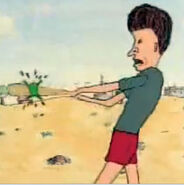 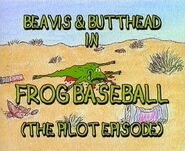 Add a photo to this gallery

In the original Liquid Television aired version, the end of the short's credits, there it a still from the short showing Butt-head making impact with the bat on the back of Beavis' head and over this image is text that reads "No animals were harmed in the making of this movie...except for Beavis." This portion has been removed from The Mike Judge Collection DVD version.

Retrieved from "https://beavisandbutthead.fandom.com/wiki/Frog_Baseball?oldid=15925"
Community content is available under CC-BY-SA unless otherwise noted.