Citizen Butt-head is the 16th episode in Season 3 of Beavis and Butt-Head. It is the overall 47th episode.

Principal McVicker and the other teachers at Highland High School plan to keep Beavis and Butt-Head away from the visiting US President Bill Clinton, who takes a real shine to them at his Q&A session. 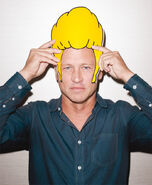 Mr. Beacis man
Add a photo to this gallery

This episode is present on the "Law Abiding Citizens" VHS tape and DVD. Although the episode's promo is on Disc 3 of the Mike Judge Collection Volume 1 DVD, the episode is not present there. Two trusted sources exist for this episode online (without music videos), as seen on the provided YouTube and Dailymotion links. It is highly recommended to download the video from the source (especially the YouTube one) before Viacom takes it down.

Retrieved from "https://beavisandbutthead.fandom.com/wiki/Citizen_Butt-head?oldid=15806"
Community content is available under CC-BY-SA unless otherwise noted.