"Bounty Hunters" is the 16th episode in Season 8 of Beavis and Butt-Head. It is the 216th episode overall.

Beavis and Butt-head are at a hardware store and are laughing at the hoses. Then they see a bouncer who resembles Dog the Bounty Hunter and his wife Beth (who they say has big hooters) then Beavis and Butt-head decide to become bounty hunters. So the Dog look-alike gears them up and when they arrive at the post office they pass the wanted posters and think pictures of noncriminal people skipped bail. They then ask a man where President Obama (thinking he's a criminal) is and he says in Europe, but they then see a picture of a karate class and head over to the school. Before they went in they prayed but instead of kicking the students ass' and getting money the karate teacher kicked their ass' then when they return to the post office they take a picture of the Postmaster General (who they call Mr. Post). When they go to the back of the post office they see a homeless guy who looks a little bit like the Postmaster General who thinks Beavis and Butt-head are his old friends. So the boys take him to the police station and Butt-head flirts with a female cop. But Butt-head makes her mad and she pepper sprays him and Butt-head sprays Beavis who tries to spray Butt-head but sprays himself. In the end, Beavis and Butt-head are on the ground screaming and the homeless guy thinks he's a party in 84 and screams with the guys.

On the FBI's Most Wanted at the post office, the list includes Harry Sachz and the Crazy Farmer.

Beavis and Butt-head meet the Dog the Bounty Hunter look-alike. 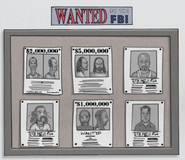 FBI's Most Wanted list at the post office. Note the Crazy Farmer and Harry Sachz in the top row.
Add a photo to this gallery
Retrieved from "https://beavisandbutthead.fandom.com/wiki/Bounty_Hunters?oldid=15454"
Community content is available under CC-BY-SA unless otherwise noted.