Beavis and Butt-head is an American animated television series created by Mike Judge. It's about two teens who act like a thoughtless person who does a lot of stupid things. It premiered on MTV's Liquid Television on September 22, 1992, had its original finale on November 28, 1997, and made a comeback on October 27, 2011. As of 2015, the series' reboot is in limbo; only a single well received season of the reboot was made, due to falling out again with MTV and Viacom, and with Mike Judge looking for a suitable sponsor. 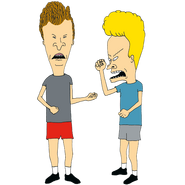 Beavis and Butt-head, seen sitting on the couch watching TV!

Beavis and Butt-head's most famous laugh, identified from the show where they are in.
Add a photo to this gallery
Retrieved from "https://beavisandbutthead.fandom.com/wiki/Beavis_and_Butt-head?oldid=16097"
Community content is available under CC-BY-SA unless otherwise noted.